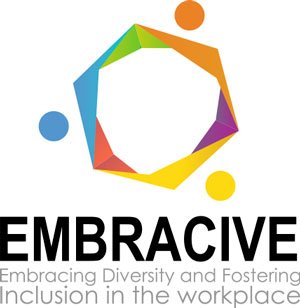 Managing diversity in the work environment is a relatively modern trend for most Greek companies. The need to implement relevant policies, however is growing – mainly due to changes in the composition of human resources. For  example, the recent EU Proposal for a Joint Employment Report 2021 states, that despite an increase in women’s participation in the workforce, the wage gap with men has narrowed slightly in recent years. Respectively, employment opportunities for people with disabilities are significantly smaller compared to the general population.

On the issue of diversity management, SEV – Hellenic Federation of Enterprises, in the framework of the European EMBRACIVE project, concludes from a relevant survey completed in October, that 204 business executives responded with extremely interesting results. Responses show that diversity management is a recorded value for 138 companies (68%), while only 87 companies (43%) have written policies on the same issue. When asked about the reasons for adopting formal policies for business diversity, the most important reasons for adoption of modern trends is the strengthening of the company’s image/reputation.

Although gender seems to be the second most important feature, in a recent publication of the European Institute for Gender Equality (EIGE) of the Equality Index for 2019, Greece ranks last amongst 28 countries. It is mentioned, that  our country needs to improve significantly on this issue.

To avoid direct or indirect discrimination in the recruitment / selection process participants consider, that the most important factors are to provide specific instructions to executives involved in the selection process, and to avoid gender discrimination in ad content. The biggest problem companies face regarding the enhancement of diversity in attracting / choosing is the prejudices within the company itself.

Similarly, to avoid discrimination amongst existing staff, a company considers the most effective practice is to provide salary increases based solely on performance and not on ‘different’ characteristics of employees. Usually, employees are informed and educated about issues related to diversity through general culture or behavior inclusion programs. Possibly because the issue of diversity is relatively recent in business culture, there are, for most participants measurable goals except for gender, age, and the educational level. Finally, the majority findings show that the implementation of the General Regulation on Personal Data Protection (GDPR) facilitates, while respectively the pandemic of Covid-19 doesn’t affect the enhancement of diversity.

Based on results of the quantitative research in combination with the analogous ones from the parallel quality, it appears, that to improve the capacities of Greek companies, it is extremely useful to enhance the diversity of human resources, especially relevant and needed when operating on a global level.